Anna Kruhelska is a visual artist and practising architect based in Lodz, Poland. She has worked as an architect on a vast array of major projects in Russia, Malaysia, and the UK, all of which has formed her understanding of form, symmetry and space, and given her a knowledge which has allowed her to cultivate a congruous and innovative contemporary art practice.

Kruhelska focuses on abstract, three-dimensional paper wall reliefs that work by reflecting light – with the overall effect dependant on the viewer’s perspective. The central concept of her work is the interplay between light and shade, contrast, and the repetitive patterns created by the folds and hollows in the work.

Inspired by minimalism, architectural composition, geometry and origami Anna creates clean, crisp, often white-on-white framed wall installations. These artworks are beautifully presented and often work alongside one another in formation so, although not officially diptychs, very often the artworks appear to flow from one frame to the next. 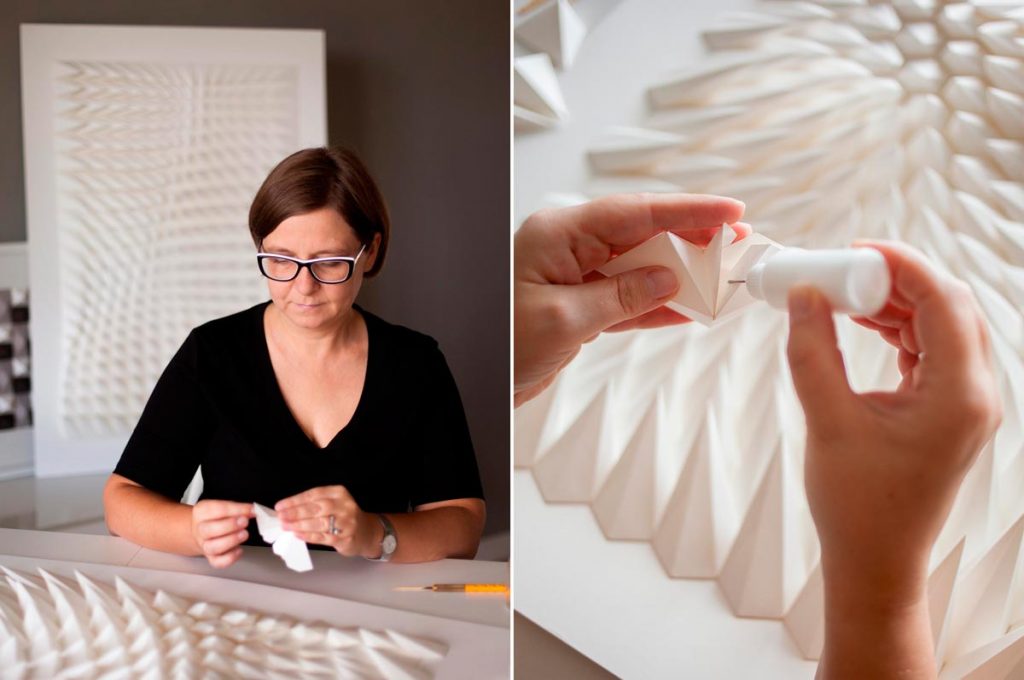 The works are made from archival, light-resistant and acid-free paper. All the pieces are folded and assembled by hand with the meticulous attention to detail.

The works are professionally framed in wooden frames with a front glass which eliminates reflections and filters UV rays. 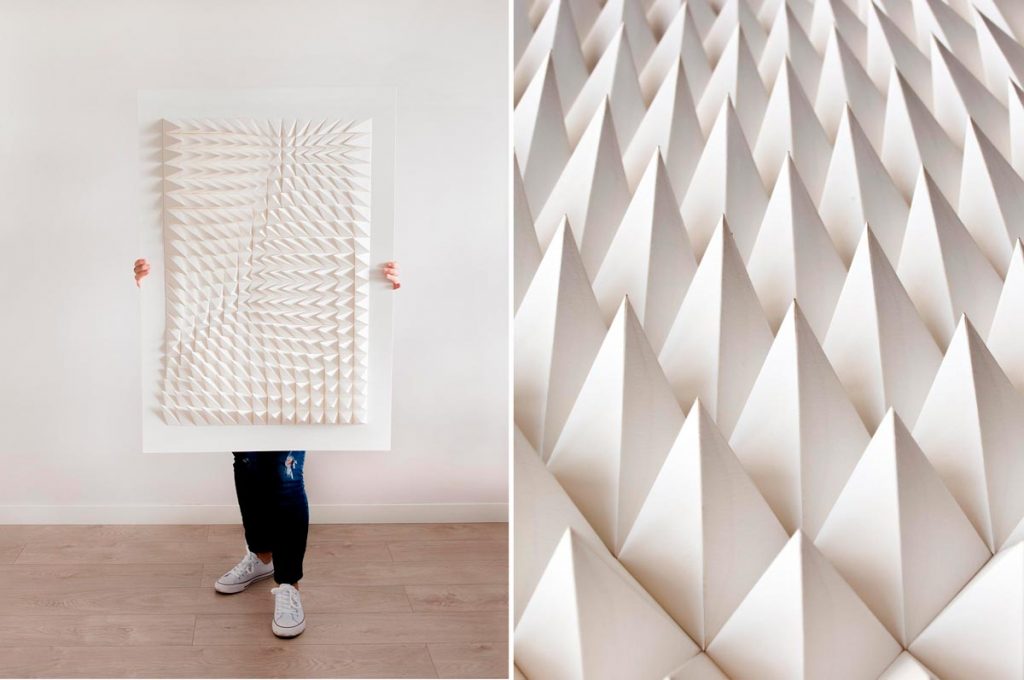 How did you get started with folding paper and art?

I am a qualified architect and for the last 14 years I’ve been working professionally. I love my job, but at some point I realized that I needed a side project, which would be more artistic and would give me the opportunity to creatively express myself and explore ideas I find interesting.

I love minimalism and simplicity and I am fascinated by patterns, texture and the play of light and shadow. Wanting to combine all these inspirations, I began to experiment with pleating fabrics but after few months, I turned to paper which I used to work with a lot during my university years. While there are many limitations of paper I discovered that it gives me a lot of creative freedom and possibilities. That’s how it all began.

On what project did you work when working as an architect?

I worked on wide rage of projects but I spent most time working on high end residential buildings, 5* hotels and luxury apartments. The construction sites were in Russia, the UK and Malaysia.

Each time it looks a bit different. Sometimes the inspiration to create a work is a simple shape, eg. a hexagon, another time it is an interesting tessellation.

I always start in front of a computer screen and it is a very creative part that makes me happy. I draw shapes and forms and try to find repeating patterns. Sometimes I spend hours on one idea, I develop it, not knowing what the end result will look like. On other occasions I have a very clear vision of what I want to achieve and I devote a lot of time to refining this particular vision. Sometimes a small change in the angle of the figure has a huge impact on the look of the whole work.

When I am satisfied with the project, I still have to translate 3d models to 2d, so that they can be cut from a flat sheet of paper. The process of cutting paper is performed by plotter cutter. Once individual shapes are cut they all need to be folded and glued manually. This part of the process is very repeatable as each relief consists of 40 – 600 individual solids. It may sound horrible but actually it’s very calming and relaxing – almost like a meditation – so I like this part of creating an art piece as well.

After hours of folding and glueing, when all the shapes are ready, the whole panel can finally be assembled.

Why do you work with paper?

Paper suits me as once folded it’s quite rigid and it allows me to work with 3D shapes I’m interested in. I can either work with quite simple 3d surface patterns based on tessellation or tiling or create more fluid and complex forms by using parametric modeling. Folding paper is also very relaxing. It lets me forget about everyday activities that can be stressful at times.

From where your inspiration comes from?

My inspiration comes from all sorts of places: architecture and minimalism are probably the strongest ones but I’m also inspired by geometry, origami and chip carving technique so popular in southern Poland.

What subject did you study?

I studied architecture in Lodz, Vienna and London. 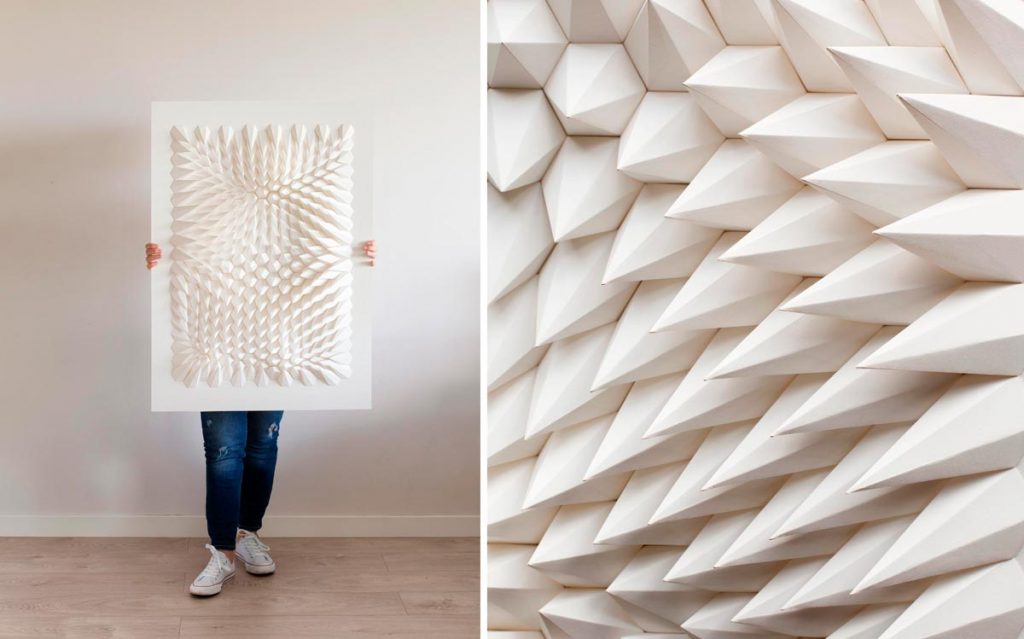 Where are you based?

I’m based in Lodz which is a one of the main cities in Poland. The city used to be a textile manufacturing hub in the 19th century but now is probably best known for its film school which is one of the oldest in the world and produced large number of top filmmakers.

Are you represented by any gallery?

Yes, I am represented by Woolff Gallery in London (UK) and Laura Rathe Fine Art in Houston and Dallas (USA).

© 2019 Anna Kruhelska
We use cookies to ensure that we give you the best experience on our website. If you continue to use this site we will assume that you are happy with it.Ok